Castrén & Snellman has maintained its popularity among law students. The 2017 Universum student survey reveals that we are the most desirable employer among law firms for the ninth year in a row. We are the third most popular out of all legal sector employers, right after the Ministry of Justice and the courts. The top three employers have remained the same for three years now in varying order.

Castrén & Snellman was followed by the European Union in fourth place and the Finnish Prosecution Service taking fifth place. We were the only private sector employer among five most popular employers.

The Universum Student Survey is conducted every year to survey the image of various employers among students. Besides the legal sector, Universum surveys students representing engineering, business and IT in Finland.

The results of this year’s Universum Student Survey were published on 20 April 2017. The survey covered 13,495 students from 40 universities. Law students accounted for 468 of the respondents.

More information on the survey is available on Universum’s website. 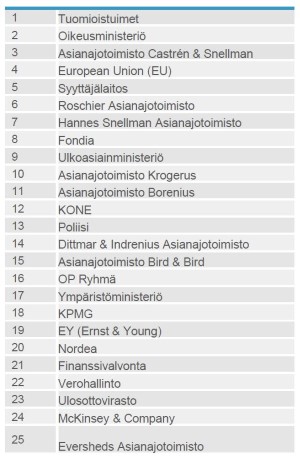