Our firm has won the Finland Law Firm of the Year award. The award was announced at the Chambers Europe Awards for Excellence 2014 gala in London 24 April 2014. Six Finnish law firms had been nominated for the award. In addition to awarding the best firm in each country, Chambers awarded European law firms in categories such as Outstanding Contribution to the Legal Profession as well as Client Service.

This is the second highly respected award that has been granted to our firm this year: in February, The Lawyer magazine chose Castrén & Snellman as the best Nordic law firm.

Chambers & Partners has been examining and ranking law firms for over twenty years. These global studies are based on not only background information provided by law firms, but also especially on feedback provided by clients. Chambers selected its nominees for the Awards for Excellence 2014 on the basis of its surveys over the previous year.

For more information on the awards, please visit the Chambers website. 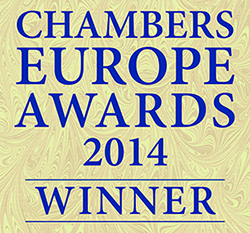 Share this:
Next
The Lawyer Magazine Presents Castrén & Snellman with Award for Law Firm of the Year: The Nordics
See all